This blog has moved to the Coyot.es Network!  If you like this blog, please check out the new location!

I will no longer be updating this blog on Blogger.
Posted by J. Campbell-Smith at 12:39 AM No comments:

Click here for the full article.
This is an article written by Dr. Doug Robinson, a member of the Crow Research Group.
Posted by J. Campbell-Smith at 10:48 PM No comments:

Thanks for sharing this Papermonkeyism!


(This is a reblog on Tumblr, so I apologize for any formatting errors once it has been posted on Blogger.)

Not a species you commonly see photographed!  A Black/Cape Crow (Corvus capensus) taken by Anja Denker in Namibia, Africa.

Having not seen one in person what I'm noticing is unique about them (via photographs) is a very slender bill and a particularly conspicuous bulge along the throat when calling or possibly displaying.
.
Posted by J. Campbell-Smith at 9:35 AM No comments:

One myth I'd like to dispel is that you have to split a pet crow's tongue to make it talk.  First off, birds do not use their tongue the same way we do to make sound, in fact birds don't even use their larynx to make vocalizations like we do.  Birds utilize their syrynx, which is found in the chest just before the bronchi branch off to each lung.  Each bronchi can produce a sound using air vibrating through the external labia and the internal tympaniform membranes.  (This means that birds can produce two different sounds at once!  It's way cool!)  Movement of the avian tongue may change the shape of the mouth as sound is coming out, but not in the same ways as we use our very flexible tongue.  So the point is that the tongue (which is fairly rigid in corvids) is not used in creating vocalizations the same way humans do, therefore altering the tongue has nothing to do with the sounds a bird makes or the ability of a crow/raven to mimic human speech.  (If you would like to read more about how birds produce sound please click here.)

Most Corvus learn to speak human words, especially when living amongst humans.  I have personal theories that it relates to group identity, but let's just go ahead and move on to the cute videos:

White-necked Raven (Corvus albicollis) that could seriously use a bill trim.  (Notice that there is a bit of tongue movement likely to alter the shape of the throat as sound goes out.)

White-necked Raven (Corvus albicollis) saying "hello" and "hi" (with a much nicer bill!)

Julian the Common/Northern Raven (Corvus corax) not only mimicking one person saying "What's up", but two different voices.

An American crow (Corvus brachyrhynchos) saying quite a lot of things!  He/she is quite adorable!

A Rook (Corvus frugilegus)...I think it's saying "It looks good."

A Eurasian Magpie (Pica pica) saying his name and mumbling other things.  Way too cute!

A Blue Jay (Cyanocitta cristata) saying her name.  (Please note that is is illegal to have a pet blue jay...or any native corvid...as a pet in the United States without federal permitting.)

I think that probably covers a bit of the corvids, especially Corvus.  No tongue splitting needed!
Posted by J. Campbell-Smith at 8:25 PM No comments:

I just want to impress upon you that fact that this is a jungle crow (Corvus macrorhynchos) eating a shark.  Just take a moment to absorb the awesome.
Posted by J. Campbell-Smith at 12:08 AM No comments: 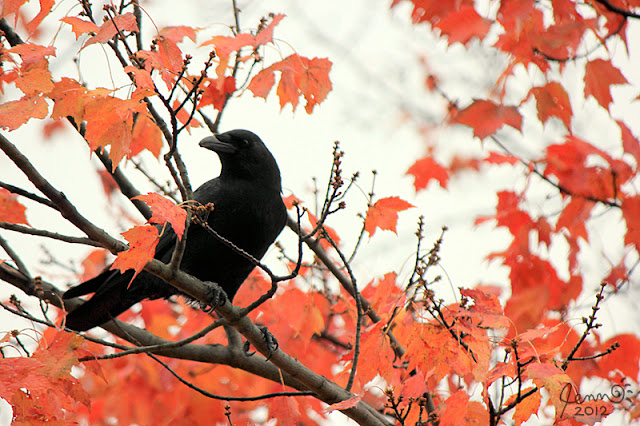 A photo I took the other day of an American crow in a maple tree.  Figure I'll give folks a nice photo to look at until I can assemble a full post :)

J. Campbell-Smith
I'm a nature nut with a BS in zoology and a certificate in evolutionary studies. I am currently a Ph.D. candidate studying animal behavior (in particular how crows are smarter than me). Oh yes, and I love corvids!